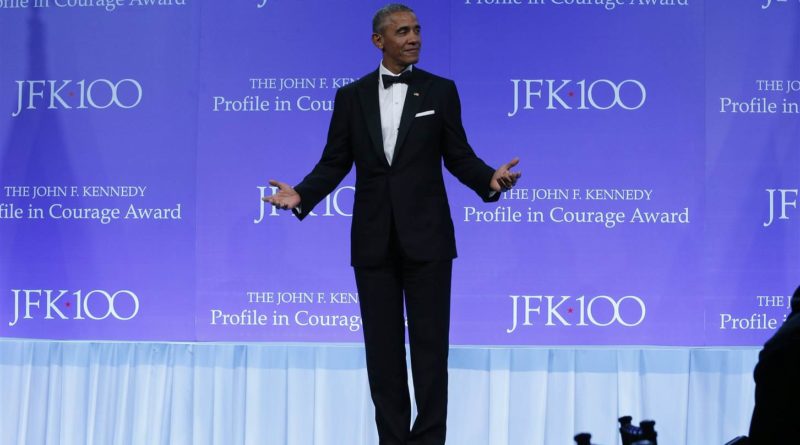 While accepting an award from US former president John F. Kennedy (late) family last night i.e. Sunday, the most popular American leader and ex-president Barack Obama while talking with people said that Americans must have the courage to “stand up to hate” during a time of polarization.

The most popular American leader and former US President Barack Obama said “Our politics remains filled with division and discord,”  few days later of winning of bill regarding dismantle much of his sign health care program.

“Courage means not doing what is simply politically expedient but doing what [people] believe in their hearts is right,” he said. “And this kind of courage is required of all of us.”

The former US President Kennedy’s daughter, Caroline Kennedy,  presented award to ex-US President Barack Obama, on that occasion she said, “Today, when many doubt the integrity of our elected leaders, this award is more important than ever.”

Jack Schlossberg, grandson of the late former US President John F. Kennedy, introduced ex-President Barack Obama, with this sentence: “Without President Obama, I might still be sitting on my couch eating Doritos and watching sports.”

The John F. Kennedy Courage Award is named after 1957 Pulitzer Prize-winning popular book by US former President John F. Kennedy that profiled eight U.S. senators who risked their careers by taking principled though unpopular positions. May 29 2017 will be his 100th birthday.